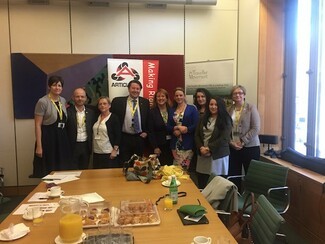 30 MPs have signed an Early Day Motion (EDM) supporting the Operation Report Hate campaign “to raise awareness of hate crimes within the Gypsy, Traveller and Roma communities and the need to report them”.

Tabled by Scottish National Party (SNP) MP for Edinburgh North and Leith, Deidre Brock the motion highlights the underreporting of hate crimes within the GTR communities: the Motion “notes that hate crimes towards the Gypsy, Traveller and Roma communities are currently severely underreported”.

The motion also calls for the Government and devolved administrations to help improve reporting rates by “by instructing police forces and all criminal justice agencies to use Gypsy and Traveller ethnic categories”.  This is particularly helpful to the Traveller Movement and the Irish Chaplaincy, who have been campaigning for the introduction of ethnic monitoring of Gypsy, Traveller and Roma children in the youth justice system.

Brock’s motion continued and urged “the Government, devolved administrations and local authorities to work with the organisations involved in Operation Report Hate to ensure hate crimes against Gypsies, Travellers and Roma are reported, recorded and resolved”.

Commenting on the EDM, the Traveller Movement’s Chief Executive Yvonne MacNamara said: “We are very grateful to Deidre for tabling the Motion recognising the Operation Report Hate campaign and calling for much needed action to improve reporting rates.

We are delighted that in just a couple of days, the Motion already has 30 signatures and includes MPs from all the major parties.”

The Motion was also signed by co-leader of the Green Party, Caroline Lucas and key advocate for GTR rights in Parliament Kate Green MP.

Yvonne added “this Motion is a small, but important step that gives hate crimes against Gypsies, Traveller and Roma the same profile and public recognition afforded to other hate crimes. We will continue to work with the community, other organisations and parliamentarians to ensure hate crimes against GTR people are reported, recorded and resolved”.

The Travellers’ Times understands that organisations involved in the Operation Report Hate campaign will be continuing to encourage other MPs to sign and support the EDM.

The EDM and its signatories can be found here: https://www.parliament.uk/edm/2016-17