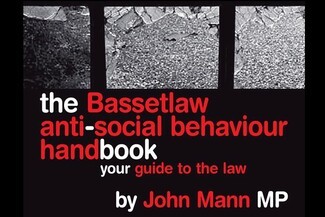 Parliamentary group for anti-Semitism pulls out of debate on Gypsies, Roma and Travellers “with no explanation” after failing to answer questions on Chair’s booklet containing “offensive” advice about “travellers”.

A three-way parliamentary group seminar planned to discuss racism against Gypsies and Travellers has dramatically collapsed after the All Party Parliamentary Group (APPG) for Anti-Semitism pulled out after details of an “offensive” legal advice booklet emerged - produced and distributed by John Mann MP, the Labour MP for Bassetlaw, Notts, and the Chair of the Anti-Semitism APPG.

The advice on anti-social behaviour booklet, “the Bassetlaw anti-social behaviour handbook” – seen by The Travellers’ Times - was written by John Mann and contains sections of advice for his constituents on how to deal with ‘loitering by youths’, ‘graffiti’, ‘neighbours from hell’, ‘alcohol’ – and ‘travellers’.

In the section on ‘Travellers’, which mainly deals with the civil offence of trespass, there is a big, bold strapline saying “the Police have powers to remove any gypsies and travellers” (sic).

Romany Gypsies and Irish Travellers are legally recognised ethnic minorities in the UK and are protected by Equalities laws from discrimination.

A Romany Gypsy constituent of John Mann, who sent a copy of the booklet to The Travellers’ Times, said that the racialisation of the offence of trespass was innapropriate: “It's outrageous from a man that, likes to give the public the impression that he's against race hate and prejudice.”

The Travellers’ Times has heard claims from campaigners that although the booklet was produced in 2007, it has been distributed to the public “on at least six occasions since.

A legal expert in Traveller law and police powers around trespass, contacted by The Travellers’ Times, has described the legal advice in the section on Travellers as “wrong.”

The Traveller Movement, a Gypsy and Traveller campaign charity, who were one of several organising groups along with Rene Cassin – a Jewish charity which also promotes Gypsy and Roma rights - has said that after the “highly offensive handbook” was raised with the APPG for Anti-Semitism the event was “cancelled with no explanation”.

The Travellers’ Times were invited to the joint event planned in Portcullis House on the 19th October, which was to be chaired by Lord Boswell from the All Party Parliamentary Group for Gypsies, Roma and Travellers and had speakers invited from the UN. It is not known whether the seminar will continue without the APPG for Anti-Semitism and the outcome remains “in doubt.”

After a public spat with Labour colleague Ken Livingstone after the former Mayor of London was accused of making anti-Semitic statements, John Mann wrote in The Jewish Chronicle in early May: "If Labour cannot combat racism then we are nothing – and racism always includes antisemitism. If we cannot do that now, then we have no reason to exist".

During the Second World War, the Nazis murdered six million Jews and an estimated half a million to one million Roma Gypsies.

State persecution of the German Sinti and European Roma living in Germany had been growing since Hitler took power in 1933. Named as a racial enemy in the 'Protection of Blood and Honour' Nuremberg laws of 1935, the Sinti (German 'Gypsies') were stripped of citizenship and lost their right to vote.

Compulsory sterilisation of 'asocial' Sinti had begun in 1934. In 1938, the first 'Operation Work-shy' took place with many Gypsies being rounded up and forced into municipal labour camps.

In 1942, Heinrich Himmler, head of the SS, issued the Auschwitz-Erlass declaration and ordered the deportation of “Zigeuner (Gypsy) halfbreeds, Rom Zigeuner and members of Zigeuner tribes of Balkan origins with non-German blood” to Auschwitz.

The Travellers’ Times contacted John Mann MP, who stood by the booklet – which was produced using parliamentary allowances - and said that 20,000 copies had been distributed.

“I have received no complaints from constituents on this booklet which had been used to assist self-defined gypsies and travellers (sic) in dealing with anti-social behaviour in their locality,” he said, adding that the booklet “was pre checked for legal accuracy by the government ASBO unit in the home office and the local police in advance.”

Many Jewish groups and individuals support Gypsy, Roma and Traveller rights. Jews recently joined with the Gypsy Council at the Holocaust Memorial Gardens in Hyde Park on August 2nd this year to remember Roma, Sinti and Gypsy victims of the Nazi Holocaust.