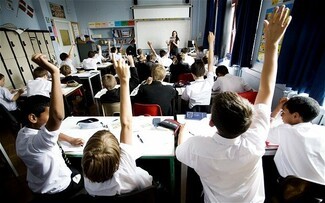 The Children’s Commissioner has spoken out against the increasing amount of exclusions of Gypsy, Traveller and Roma pupils at a packed meeting in Parliament.

Reacting to the news that Gypsy, Traveller and Roma pupils are on average four times more likely to be excluded from school than other children, the Children’s Commissioner for England said: “Children should only be excluded in exceptional circumstances and when the educational needs of the wider school population means there is no alternative.”

The roundtable event, organised by the Traveller Movement and hosted by Kate Green MP, met on Wednesday 29th June in the Houses of Parliament to discuss the disproportionately high number of exclusions given to Gypsy, Traveller and Roma pupils.

The event was organised on the back of research recently published by the Traveller Movement which found that GRT children, in some areas in England, were 27 times more likely to be excluded than other children.

The roundtable also heard from Gypsy, Traveller and Roma parents and education professionals on how best to reduce the number of school exclusions.

Commenting on the event, the Traveller Movement CEO Yvonne MacNamara said that the disproportionately high school exclusions amongst Gypsy, Traveller and Roma children must be set against a backdrop of wider issues in education affecting these children.”

“It was clear from the discussion at the event that a coordinated approach is needed to tackle the discrimination and bullying which children from Gypsy, Traveller and Roma (GTR) communities suffer every day in school,” she said.

“We hope this event is the first step in a constructive relationship between the Children’s Commissioner, the Department of Education, the APPG for Gypsy Roma Travellers and the community itself to ensure GTR children are offered a more stable and accessible education. “

“It is only through a coordinated effort, with leadership from the Government and schools, to tackle discrimination and bullying that we can offer a more inclusive education system for all children.”

“Good practice from these needs to be shared,” she said.

“Overall the number of exclusions has been decreasing in recent years but we need to look at the role of parents, schools, local authorities and government in driving further improvements for all children.”

‘Never Giving Up On Them’, School exclusions of Gypsy, Traveller and Roma pupils in England by the Traveller Movement can be read here: http://travellermovement.org.uk/wp-content/uploads/Never-Giving-Up-On-Them.pdf

This research follows on from a report published in 2012 by the Office for the Children’s Commissioner. ‘They never give up on you’ can be found here: http://www.childrenscommissioner.gov.uk/publications/%E2%80%9Cthey-never-give-you%E2%80%9D-school-exclusions-inquiry-full-report