Gypsy and Traveller rally against new planning laws in London 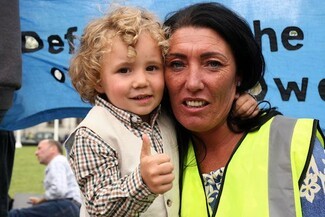 Gypsies, Roma and Travellers from across the country collected in Parliament Square on Saturday to demonstrate against the Government’s new planning laws redefining ‘gypsy status’ and to hand in a 5,000 strong petition to the Prime Minister at Downing Street.

The demonstration happened on Saturday 21st May, beginning at 1pm, and concluding at 4pm with the petition being handed in at the end.

Yvonne MacNamara, CEO of the Traveller Movement, who was at the Dosta Grinta rally, said that it was great to see such a unified response to the governments “draconian new laws”.

“The rally steering group did great work,” she said. “The Traveller Movement is proud to be involved in this initiative.”

Along with the hundreds of demonstrators on foot carrying placards and banners, there were also four carts and horses festooned with flags and slogans. The horses were particularly popular with many of the tourists visiting the area, who posed with them for photos. However, due to a by-law in place on Parliament Square, horses were not permitted to remain on the grass in case they damaged it, so they took to the road and circled the Square instead.

The petition was handed into Downing Street by Ruby-Leigh, 13, and Scarlett-Betsy Smith, 11, Tony Buttigieg, 18, and HertsGATE’S Josie O’Driscoll.

The petition was against the reclassification of ‘gypsy status’, which is used to determine a person’s eligibility to plan, develop and live on Traveller sites. To pass the new ‘gypsy status’, Gypsies and Travellers will need to travel for three months every year, which will make many people homeless, or force them to the road.

“It’s a catch 22,” said a spokesperson for the rally organisers. “The Travelling life has been effectively criminalised, but to settle and obtain legal authorisation for their homes, Gypsies and Travellers’ are being forced to ‘travel’.”

Ruth Barnet, a Holocaust survivor and campaigner, spoke about the need to remember the past to inform the present. She said that during the Holocaust, between ¼ - ½ million Roma and Gypsies were murdered by the Nazi’s “in exactly the same way and in exactly the same camps.” She said that governments needed to stop persecuting Gypsy and Roma people.

The demonstration was a peaceful and sunny affair, with an excellent turnout.