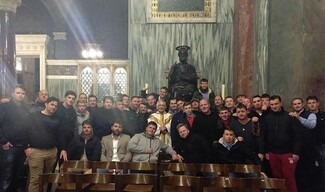 Two groups of Catholic Traveller and Gypsy men and women are heeding the Pope’s message and have raised thousands of pounds to buy sleeping bags, hampers, hats and gloves to aid the needy, the homeless and the rough sleepers of London and Manchester this Christmas.

At the recent audience for Gypsies, Roma and Travellers at the Vatican, Pope Francis told his listeners that they needed to do more to combat the often prejudiced views about them.

However, the men’s Catholic Travellers Bible Study Group – an online network of over 70 Traveller men of all ages – were already on the case and have raised over £5,000 in donations in two and a half months. The group will be distributing much-needed warmth and cheer to rough sleepers this Sunday; December 6th, after a service at the Holy Name Church, Oxford Road, Manchester.

The men have already completed a previous event after a service at Westminster Cathedral and gave out waterproof sleeping bags, hats and gloves – brought down to London from Manchester by Declan O’Loughlin, one of the members of the UK wide network - to rough sleepers and street people.

The men, who were joined by Deacon Andrew Carter, organised themselves into five groups and “roamed the streets”, giving out the sleeping bags and thermal clothing to any rough sleepers that they found.

“I admit I was a bit apprehensive at first,” says Declan. “There where so many homeless, more than we expected. I thought they would be ‘give me the sleeping bag but go away with your Jesus’, but they weren’t. That wasn’t what happened.”

Declan was moved by his experience that night. “I felt that we were giving them back a bit of humanity as well. The homeless are often invisible and people don’t look at them, don’t recognise their humanity,” he says.

“We chatted, shook hands, even hugged. Some said but I don’t feel right because I have been bad in the past, so I said, we have all done bad things, we are all sinners, but Jesus loves us all.”

Not to be outdone, a separate but linked Bible study group of Catholic Traveller and Gypsy women have also raised thousands of pounds, through the Catholic charity the St Vincent De Paul Society, to buy food parcels and hampers for vulnerable and needy families from all faiths and none.

Both the men and women’s groups raise the money from the members of the Bible group network and through Gypsy and Traveller communities using online donations on social media and by face to face collections. Accounts and receipts are meticulously kept and shared publically online.

“The idea started for us before the audience with the Pope,” says Declan. He explains that the group decided that after a chat, the men decided to “put their faith into action.“

”Jesus didn’t just preach the Gospels,” he says. “He went out and he cured the sick and fed the hungry, so I said to the lads that we should do that too.”

Eileen Doherty, a Preston-based Traveller from the women’s group, says that the women decided to start their charity initiative after the audience with the Pope encouraged them to follow the men’s example. The 200-strong Catholic Traveller Women’s Group collects money and goods through the St Vincent De Paul Society, which gives food parcels, clothes, hampers and children’s toys for vulnerable and needy families struggling with poverty. The women from the group also help out in their local areas by helping young mothers with their washing, shopping and child-care.

“We wanted to act out our faith,” says Eileen. She explains that the Pope told them to take responsibility for working against the prejudice directed against Gypsies and Travellers in the media by doing good works.

“Travellers are very generous people, but we don’t often make a big thing about it,” says Eileen. “It’s important that non-Travellers realise that we are not like Big Fat Gypsy Weddings and the Pope said we had to take responsibility for changing that.”

“Travellers are famous for bad news,” laughs Declan. “It’s important that there is good news as well.”

The good news is certainly spreading in a way that was not available to Jesus in Biblical times, and accounts of the groups actions are being posted and talked about on Gypsy and Traveller social media networks.

The men are planning another drop between Christmas and the New Year. “We got enough money in the bank for one more drop,” says Declan. “Either Leeds, Birmingham or Sheffield – we haven’t decided yet. It could be the coldest winter for fifty years.”

Find out more about the Catholic Traveller Bible Study Groups on their community Facebook Page by following this link: https://www.facebook.com/CatholicTravellersaidtohomeless123/?fref=ts

Find out more about the St Vincent De Paul Society by following this link: http://svp.org.uk/