Jess Smith leads campaign to save the Tinker's Heart 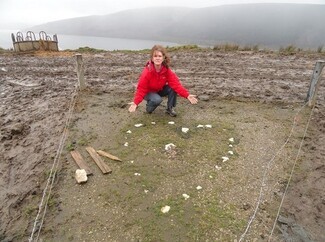 Above: Bestselling author Jess Smith with the Tinker's Heart of Argyll, a "sacred" site for Travelling people

PRESS THE ORANGE BUTTON BELOW TO HEAR THIS ARTICLE READ ALOUD

MANY would assume that Gypsies and Travellers don't have historic sites: places they have gone back to down the generations, and which hold a special place within the culture.

Yet the Tinker's Heart in Argyll, Scotland, is exactly that: an ancient monument dating back to the 1700s, and a "sacred place" for Travellers.

Now, a petition has been launched with the Scottish Parliament to help prevent the Heart from being destroyed.

For centuries, the Tinker's Heart was the "Gypsy Wedding Place" where the Travelling people of Scotland would go to get married and have their babies blessed at the Lochgoilhead cross roads, looking out over loch Fyne. Weddings were still taking place there until the late 1970s. Like the Church in the Woods near Bramdean Common in Hampshire, the Heart remains a site of pilgrimage to many Travellers.

The Heart itself is made from quartz stones set into the ground, an ancient tradition for remembering lost relatives in Scotland.

"The Tinkers' Heart is not a huge site in physical terms, but in terms of love, of memory and of sacred significance, it is a site of enormous proportions and cultural, historical and religious significance," says bestselling author Jess Smith.

"The Travelling people who have lived and contributed to Scottish culture for centuries have only this little place as proof of our existence," she says.

The Tinker's Heart is also a sacred place to remember the dead, evident by the coins and flowers that lie scattered at the Heart: some people still visit to pay respect and honour their ancestors.

In the 1920s, Council workers laid tarmac over the area and covered the Heart, prompting a furious reaction from Travellers and others alike.

"Both Tinkers and local landowners objected to this action and Lady George Campbell insisted that the tar be removed from the site. Not only was the Heart restored, this episode showed the importance of the Heart to both a distinct Scottish cultural group and to the local gentry," says Smith.

In 2008 Argyll & Bute council drew up plans for restoration work and money was allocated to the project. However, local residents considered that the £34,500 cost was too much and promised to take care of the area. They erected three posts and wire. This was later damaged, and there are now cattle feeding and tramping on the Heart. By turning the site into a listed monument, Jess Smith hopes it will be saved from the elements and cattle and preserved for future generations.

"The demise of traditional Gypsies and Travellers in Scotland has long been predicted. It would be tragic if the nomadic history of these / my people who have helped to colour the culture of Scotland, should end in such a way without a tiny little spot being scheduled and listed as our place," she says.

Petition closes on 28th May.