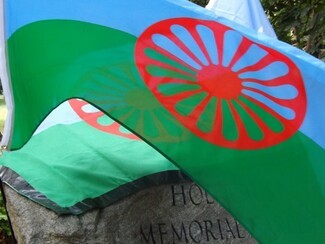 Above: Romani flags fly at the London commemoration of the Porrajmos earlier this month. Photo: © Mike Doherty

THE JEWISH Human Rights organisation René Cassin has spoken out about the need to remember the Romani Holocaust and said "there is no question that Roma suffering during this time has not received enough attention".

Following events in London to commemorate the Romani Holocaust- which is referred to as O Porrajmos, meaning "The Devouring" in the Romani language- René Cassin issued a statement lamenting how "Germany only officially recognised the Porrajmos in 1982".

The group also said that "Although there are varying estimates about the exact death toll experienced by the Roma community, there is no question that Roma suffering during this time has not received enough attention".

René Cassin is named after Monsieur René Cassin, a French Jew and Nobel Laureate who was one of the principal co-drafters of the Universal Declaration of Human Rights.

The statement came after a service of remembrance was held in London to mark the Porrajmos, the mass murder of Roma and Sinti victims by the Nazis during the genocidal Holocaust.

Historians' estimates of the total number of Romani dead vary from over 200,000 to 1.5 million.

The event, at the Holocaust Memorial Gardens in Hyde Park, was attended by Roma, Romany Gypsies, Travellers, Jews and supporters, who came together to mark the anniversary of August 2nd, 1944.

On this day, nearly sixty years ago, the remaining 2,900 Roma and Sinti inmates of the Ziguenerfamilienlager (Gypsy family camp), part of the Auschwitz concentration and death camp, were taken to the gas chambers and murdered by the Nazi regime.

The event in London coincided with a memorial service in Kracow, Poland, near where Auschwitz was built during the Nazi occupation in World War Two.

Veerendra Rishi, Vice President of the World Roma Organization said: “Hitler not only murdered many Jews, he murdered many Roma as well. Many Jewish victims have had compensation from the German Government but the Roma have had none. We are still fighting for that.”

Amongst the speakers was Professor Rainer Schulze, a historian at Essex University who specializes in Roma and Sinti history in Europe. Professor Schulze explained why the Roma and Sinti were kept together in a family camp, which was unique in Auschwitz and was “an indication of Roma self assertion in the hardest of times.”

“The Nazis knew that they would have a lot of trouble on their hands if they split up Roma families,” he said.

“So the Roma were not separated by selection, they were kept in one camp. This, at least for a period of time, left families intact, solidarity intact and a modicum of dignity could be kept by the Roma incarcerated in Auschwitz.”

Grattan Puxon, a Roma rights campaigner, linked the event to the treatment of Roma in Europe today: “Sixty years ago there was Hitler. Now we have to face a reality where the same Nazi attitude towards Roma is present in Europe today,” he said.

“Today, we also held a vigil outside the French Embassy because of the French Government’s adoption of an illegal policy of exclusion that has seen 9,000 Roma deported from France.”

Below is the full text of the statement from René Cassin about the Roman Holocaust:

"On the night of 2-3 of August nearly 3,000 Roma prisoners, most of whom women, children, elderly and disabled, were taken to the gas chambers to be exterminated. Although there are varying estimates about the exact death toll experienced by the Roma community, there is no question that Roma suffering during this time has not received enough attention; Germany only officially recognised the Porrajmos in 1982. This is symbolic of the general reluctance to condemn Anti-Roma biases that still exists today. Racism against one group endangers all and compromises the very foundations of an open, liberal society. The Jewish community, with its centuries long history of persecution has a special responsibility to lead the fight against hatred and bigotry and the effort to commemorate all who perished as a result of the Nazi atrocities."