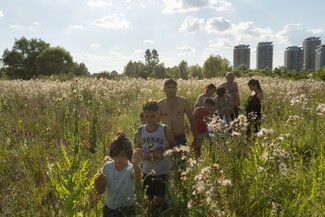 The 13th annual festival will showcase 6 UK premieres including  Acasă, My Home - winner of the Special Jury Award for Cinematography at Sundance, this documentary is a  portrait of a Roma family forced to abandon their off-grid life in the wilderness of the Bucharest Delta for an uncertain future in the city.  On 18 September the festival hosts a live-streamed Q&A with guests including director Radu Ciorniciuc, presented by Document Human Rights Film Festival. We will be interested to know what our readers think of this film.

The festivals urgent and timely programme will explore key issues facing our planet and its inhabitants, from freedom of the press to prison reform, from labour rights in the garment industry to indigenous rights and climate justice

All films are available to stream online from 16 - 27 September and will be screened alongside a series of live digital Q&As, workshops and conversations

The full programme for the 13th annual Take One Action Film Festival has been announced. Taking place online for the first time in its history, the UK’s leading global change film festival will showcase nearly 30 feature-length and short films alongside a programme of live digital Q&As, conversations and workshops from 16 to 27 September.

In its first-ever digital edition, Take One Action will continue to prioritise its focus on community, conversation and connection with voices from across the world. The programme, which is accessible to anyone in the UK and offered on a "pay what you can" basis, will once again explore key issues facing our planet and its inhabitants, from freedom of the press to prison reform, from labour rights in the garment industry to indigenous rights and climate justice. Articulated around three key strands - Sisters, celebrating women’s empowerment and solidarity; Shared Planet, exploring environmental justice with a particular focus on land rights and All Equal?, interrogating inequality in all its guises including decolonising educational and corporate practices -  75% of the films in the programme are directed by women; just under a third of the overall programme was directed by women of colour.

Take One Action has increased its access provision this year, with all films offered with captions. In addition, the Live Q&As for the opening and closing films, as well as for Pier Kids, will have BSL interpretation, as will the special events on decolonising the curriculum and holding corporations to account.

Take One Action is delighted to have expanded their team this year to welcome new programmer, Edinburgh-based Tanatsei Gambura, thanks to Film Hub Scotland's New Promoter Scheme. Take One Action is funded by Creative Scotland and the Bertha Foundation and its festival is delivered in partnership with Oxfam, Christian Aid, Global Justice Now, UNISON Scotland and Edinburgh City Council. The festival normally takes place at Filmhouse Edinburgh, Glasgow Film Theatre, Belmont Aberdeen and Eden Court Inverness and it looks forward to returning to their screens in the near future.

Feature film highlights of the 2020 programme include:

The UK premiere of Acasă, My Home - winner of the Special Jury Award for Cinematography at Sundance, this documentary is an arresting portrait of a Roma family forced to abandon their off-grid life in the wilderness of the Bucharest Delta for an uncertain future in the city.  On 18 September the festival hosts a live-streamed Q&A with guests including director Radu Ciorniciuc, presented by Document Human Rights Film Festival.

The UK premiere of feature documentary Coded Bias - when MIT Media Lab researcher Joy Buolamwini discovers that most facial-recognition software misidentifies women and darker-skinned faces, as a woman of color working in a field dominated by white males, she is compelled to investigate further. An utterly compelling wake-up call and a call to action, Coded Bias unmasks Artificial Intelligence by laying bare the racial and gender biases that permeate its algorithms. Celebrate the opening of Take One Action 2020 on 16 September by joining director Shalini Kantayya, and Silkie Carlo, Director of Big Brother Watch, for a live streamed Q&A at 8.30pm.

The UK premiere of Prison for Profit - a hard-hitting investigation of a private prison in South Africa, run by security giant G4S, which uncovers what happens when public services are ruled by market forces. Ilse & Femke Van Velzen , the Dutch investigative filmmakers behind the film, will be joined by representatives from War on Want and UK-based campaigning org We Own It, for a live-streamed conversation on 26 September.

The Scottish premiere of Radio Silence - an empowering portrait of unstoppable Mexican journalist Carmen Aristegui as she fights misinformation,  corruption, and violent threats to press freedom. Join director Juliana Fanjul and a representative from NUJ for a live-streamed conversation on 27 September.

The UK premiere of Smog Town -  In one of China’s most smog-ridden cities, the government’s “Blue Sky War” is in full swing. Though the problem is obvious, solutions are decidedly less so.  On 22 September, guests including Friends of the Earth Scotland representatives will discuss the renewed urgency of combating air pollution in relation to public health.

The Scottish premiere of In My Blood It Runs - a critically acclaimed documentary exposing Australia’s systemic racism, told through the eyes of charismatic 10-year-old Arrernte/Garrwa boy, Dujuan and his family. An intimate story of struggle, strength and love. Join the filmmaking team (including Dujuan’s family – tbc) on 17 September

The Scottish premiere of The Last Ice - a visually stunning portrait of two Inuit youth grappling with their future in the face of (neo) colonialism and climate change. Join protagonist Maatalii Okalik for a live streamed Q&A on 19 September.

The Scottish premiere of Made in Bangladesh - A young Bangladeshi garment worker discovers the power of activism on a journey towards collective liberation and empowerment. This timely investigation of the garment industry and fast fashion is presented in association with Christian Aid and is accompanied by a live streamed Q&A with director Rubaiyat Hossain, and a representative from campaigning group Labour behind the Label on 25 September.

The UK premiere of Pier Kids - an intimate and empathetic portrait of the queer youth of colour experiencing homelessness on Christopher St Pier in NYC. Presented in association with Scotiish Queer International Film Festival, join filmmaker Elegance Bratton and Scotland-based writer/programmer Harvey Dimond for a live streamed conversation on 23 September.

Softie - a story of courage and conviction that captures the journey of a charismatic young political activist in Kenya. Join TOA New Promoter Tanatsei Gambura on 21 September in conversation with the film’s director, Sam Soko, alongside protagonists Njeri Mwangi and Khadija Mohamed to explore the complexities of activism in Kenya and the position of women's voices in freedom struggles.

Alongside the feature films, Take One Action will present three short film programmes showcasing filmmakers from Scotland and across the world and three special events:

Women In Motion - a special programme of short fiction and documentary films, all directed by women, exploring women’s relationship to place, ancestry and their physical selves. Including Edinburgh filmmaker Hope Dickson Leach’s Strong Is Better Than Angry, filmed at a women’s gym in Glasgow and the Scottish Documentary Institute-produced Let My Body Speak by director Madonna Adib, as well as Hello Ahma from Singapore and Maja from Denmark.

The Ground beneath their feet: Land Rights and climate justice - three short documentaries about indigenous people and their rapidly shifting environments, followed by a panel discussion, in association with Christian Aid. Tim Wenster’s Until The Last Drop follows a Palestinian and an Israeli farmer with very different access to water in the West Bank; Sasha Rainbow’s multi-award-winning Kofi and Lartey captures two young Ghanaian boys’ daily life in Agbogbloshie, one of the world’s largest electronic waste dumps, and their hopes for the future and Anjali Nayar’s Oil and Water documents women in Kenya’s Turkana region organising themselves to stand up against oil giant Tullow, their government and the men in their own communities to protect their ancestral lands.

A Bridge Between Starshine and Clay: Poetry for Empowerment - a special program of inventive shorts by female animators followed by a practical poetry-writing workshop on women's resistance and self-empowerment, led by Take One Action’s New Promoter Tanatsei Gambura. The workshop will run on 19 September at 4 pm via Zoom with limited participants (women / non-binary only); a full transcript is available in advance for D/deaf and hard-of-hearing participants.

Other live events include a special session on 20 September at 4 pm focusing on decolonizing the curriculum and, on 27 September at 4 pm, a campaigning workshop on holding corporations to account.

Tickets for all films are on sale today at www.takeoneaction.org.uk. Tickets are priced on a pay-what-you-can-afford sliding scale from £2 to £10; free tickets are available on request through Take One Action’s Community Ticket Fund; ticket holders have 72 hours to watch the film(s) they purchase, within the festival dates.