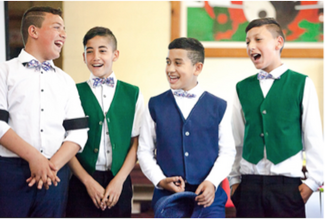 The event attracted many from Gypsy, Roma and Traveller communities in Newport, and was focused around an art competition which was open to all Newport primary and secondary schools.

The art competition opened a month prior to the event and received over a hundred entries from pupils in Foundation Phase through to Key Stage Four.  The entries ranged from drawings, paintings and collage, to films and dance routines.  The standard of work was very high so choosing winners was tough!  All of the art work was displayed for visitors to appreciate and enjoy on the day.

When the entertainment finished, pupils had opportunity to experience a variety of different activities such as lino printing, drawing, Romanian plate painting, traditional Gypsy Traveller card making, a Roma language workshop, sporting activities and soup making.  We were also joined by colleagues from Travelling Ahead, The Romani Arts Council and SEWREC.

As the weather was so good, pupils and visitors were able to view a traditional Gypsy wagon in the grounds of the YMCA and ride on a horse which was brought to the event by a local family who explained the history of the wagon and shared stories with the pupils.  Pupils had lots of questions and thoroughly enjoyed themselves.

(Picture caption: ‘I am proud because’ tree)