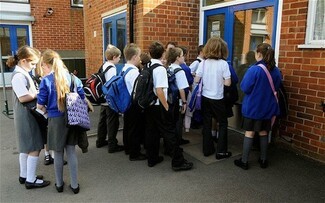 A new report on school exclusions of Gypsy, Roma and Traveller children in England, published this week by the Traveller Movement, shows that pupils from those ethnic groups are up to five times more likely to suffer a temporary exclusion than all pupils taken as a whole, with Traveller pupils faring the worse.

An exclusion is where a pupil is officially sent home from school by the Head Teacher as a punishment for either a temporary or permanent amount of time.

The Traveller Movement report also shows that in some areas the figures are even worse, with Traveller pupils in Sheffield 27 times more likely to be temporarily excluded than all other pupils – a ratio nearly double that of the year before and amounting to 300% of the total Traveller pupil cohort for the year – or every single Traveller child being excluded three times in a year.

A 2012 report by the Office for the Children’s Commissioner highlighted the fact that Gypsy, Traveller and Roma pupils are on average four times more likely to be excluded from school than the whole school population. This research also found that 100% of appeals against the exclusions of Gypsy, Traveller and Roma pupils were successful, suggesting that a large number of exclusions were unfairly given.

Yvonne MacNamara, CEO of the Traveller Movement said that every child had a basic human right to have an education and that the “shocking” rising rates of exclusions for Gypsy, Roma and Traveller children was a “damning indictment of inequality and institutionalised racism in the education system and a wake-up call for the Department for Education and the Children’s Commissioner.”

“Formal school exclusions are a key indicator of both the failure of inclusion by schools, and the marginalisation that Gypsy, Roma and Traveller pupils experience,” added Ms McNamara.

“This can blight the educational and economic futures of children from these communities, which in turn impacts on their health and wellbeing.”

Ms MacNamara also pointed out that as some areas had exclusion rates for Gypsy, Traveller and Roma children that “were on a parity” with other children, then there was something clearly going on that was the fault of the schools concerned.

Abbi Angus runs the Traveller Movement’s education project, which helps support Gypsy and Traveller parents to negotiate more inclusive treatment for their children and explains why she thinks the exclusion rates are so high.

“There are a range of issues why a parent may contact us for help,” says Abbi. “For a start there has been a breakdown of trust – if there was even any trust to start with. The parents no longer trust the school to do what’s right for their children and the school often does not trust what the parents are telling them.”

Abbi adds that this leads to situations where parents don’t raise issues affecting their children – such as bullying – because they don’t believe the teachers will believe or support them and incidents can easily escalate to a point where children are either excluded by the school, or taken from the school buy their parents.

“Parents do have responsibilities,” says Abbi. “But the main responsibility is on the school to make the pupils and their parents’ welcome, to accommodate cultural differences and to do everything they can to avoid excluding a child.”

Abbi says that nine times out of ten, when a parent has been supported by the TM education project – the child involved has kept their place and the communications between parents and teachers has improved dramatically.

“It’s about Gypsy and Traveller parents, who may have had bad experiences at school themselves when they were younger, having support from an advocate that knows their rights,” says Abbi. “We basically act as mediators on their behalf.”

The Equalities and Human Rights Commission was also quick to react to the new report, and a Commission spokesperson said:

“These are disturbing figures which echo our own findings and show that Gypsy, Roma and Traveller children are being locked out of opportunity.”

“Our recently published review of progress on equality and human rights across England showed that Gypsy, Roma and Traveller children are still four to five times more likely to be excluded from school than children from the White ethnic group.”

“And despite improvement in the educational attainment of Gypsy, Roma and Traveller children, the gap between them and their White peers has widened.  Gypsies, Roma and Travellers continue to face negative attitudes and stigmatising treatment.”

“Failure to take action to address these issues risks leaving a large number of Gypsy, Roma and Traveller children behind and denying them the right to an education, which everyone needs to improve their life chances.”

The Traveller Movement report ‘Never giving up on them’ can be found by following this link: http://travellermovement.org.uk/wp-content/uploads/Never-Giving-Up-On-Them.pdf

Abbi Angus and the Traveller Movement education project, funded by Esmee Fairbairn, can be contacted on 0207 607 2002.

The Children’s Commissioners report ‘They never give up on you’ can be found by following this link: http://www.childrenscommissioner.gov.uk/publications/“they-never-give-you”-school-exclusions-inquiry-full-report