We are Londoners Too! Protest at City Hall October 2010 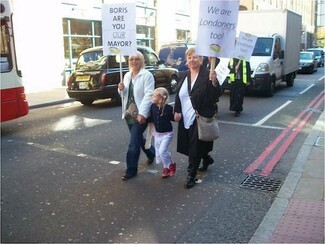 In light of the government changes to the definition of who is a Gypsy or Traveller and calls for a demonstration against these changes, The Travellers' Times thought that now is a good time too revisit a protest organised by London Gypsy and Traveller Unit in 2010.

On 11th October 2010, Gypsies and Travellers and supporters had a silent demonstration  in the City Hall during the public examination of the London Plan. They were protesting about shortage of sites in London the Mayor’s action to take out the targets for Traveller pitches from the London Plan. This meant that the Mayor would no  longer be responsible for making sure that the councils built new sites.  After this there was a lively rally and protest march to have their voices heard. Tracie Giles, a  Romany Gypsy from Newham who was at the march said ‘It was so liberating to see Gypsies and Travellers coming together and protesting for their rights for new sites. I took my two children and thought it was significant for them to be part of it because it is about their future.’