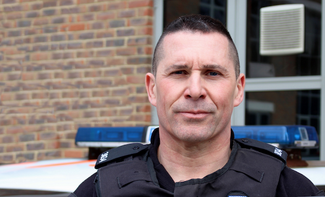 Jim Davies is a Romany Gypsy serving police officer for Thames Valley Police. Alongside Petr Torak – a Roma police officer from Cambridgeshire Police, Jim founded the Gypsy Roma Traveller Police Association for serving Gypsy, Roma and Traveller police officers and staff. The Association now has nearly a hundred members nationally. Last year, Jim achieved national coverage when he sued Thames Valley Police for discrimination and the police service settled out of court on condition that they undertake a root and branch review of how they treat Gypsy and Traveller people.

Concerned about the recent handling by the Metropolitan Police of the Traveller Movement complaint about the secret racist Facebook group for serving and retired police officers in which the members swapped ‘banter’ about “f*****g pikeys” (catch up with the story here: http://travellerstimes.org.uk/News/Investigation-into-police-Facebook-pikey-group.aspx ), Jim contacted The Travellers’ Times: and asked us to publish the following comment which we are pleased to do:

It is very easy to become focused on individual acts of racism. And while such acts, as evidenced in the Met Facebook Group, clearly are significant, disturbing and need to be dealt with effectively, they are the tip of a very large iceberg. To focus solely on these individual acts is to miss a whole host of racist events that are happening every day, right before our very eyes.

It's not about good or bad police officers. I happen to believe that the vast majority of police officer are highly ethical, professional decent people.  But whether I’m right or not is, for all intents and purposes, irrelevant.

Racism towards Gypsies and Travellers in the police is systemic and institutionalised. Across the whole of policing there are structures and systems in place which discriminate against us in a way that would not be tolerated if we were any other ethnic group in question.

Policing systems are not “Ethnicity Neutral” when it comes to Gypsies and Travellers. They are highly racialised and they subtly, and sometimes not so subtly, create an image of us as a deviant and criminal group. They create an environment where it is safe to be bigoted and to a degree, actually legitimise and encourage the bigotry itself.  It should be no surprise to anyone then, that some employees from within such an institutionalised racist environment go on to develop the views we saw expressed on the Met Facebook Group.

If we the Police are to develop the trust of the wider Romani and Traveller population; if we are serious about breaking down the barriers that exist and we are truly committed to the concept of equality for all, then we need to stop viewing racism towards Gypsies and Travellers as the result of a ‘few bad apples’. The racism in the police is institutionalised; it is root and branch stuff and not something that a bit of ‘Cultural Awareness Training’ will sort out. Police services need to turn a very critical eye to their policies, procedures, systems and organisational behaviours.

This won’t be an easy task. The institutional structures that exist towards Gypsies and Travellers have been in place, and have gone unchallenged, for a very long time. So much so in fact, that many police officers, people who in all other respects would consider themselves ethical and aware of equality issues, just can’t see the problem. However, it is only by dismantling these racialised systems that progress will be made.