The Gypsies of Belverdere Marshes 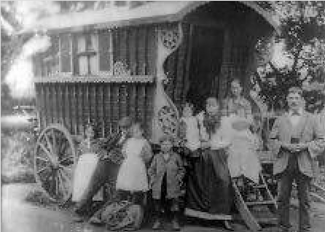 The Gypsies of Belverdere Marshes

Kent - the garden of southern England, rich fertile land with a kindly gentle climate and a close proximity to our capital.....and copious customers.

Sprinkled with hop gardens, cherry orchards, strawberry patches and the 'tattie' fields of Romney Marsh, this county was a secure source of income in the summer months, as well as a stopping place, a convenient campground for the Romanies.

In winter months, when field work that had fed the nation had finished, families headed back to more urban stopping grounds, where opportunities for hawking and dealing abounded.

Belverdere Marshes, that poorly drained, course, grassed area on the banks of the Thames, close to Tilbury docks, had much to recommend it.

Flat land for the stationing of vardos and generous grazing for the grys, meant families congregated from far and wide.

The word Belverdere comes from the Italian, meaning beautiful view, suggesting at one time it was rural and uncluttered. In those days, Bexley Heath, Erith and Abbey Wood were mere villages, potential customers for clothes pegs and lace, eager ears for hawkers, carriers of news and heaven forbid, gossip.

Records show that Gypsies had made the Marsh their home by 1895. In the summer months when most families went travelling, the numbers fell to the 600s....but when winter wanderers returned, the population rose to 1700, as families packed in tight. This made the Marsh, the largest Gypsy camp in England.

Acting for Erith Urban District Council in 1896, the 'Inspector of Nuisances' reported 9 plots of land -or yards - had been purchased by the Gypsies.

Alongside clusters of waggons and tents, a motley medley of makeshift sheds, shacks and shanties sprung up. They appeared, like barnacles on a boat....and were equally difficult to dislodge.

By 1947 it was arguably the largest habitation of its kind in Europe. Scarrots, Rutherfords, Turners, Lambs, Pearces and Coopers all made it their home. It created quite a spectacle...280 ramshackle structures, made from wrinkly tin, deal doors and any salvageable oddments that conveniently floated down the Thames. Bare earth floors, walked concrete hard and a plethora of chimneys churning out smoke.

The outward appearance however was deceptive, for Belverdere was home to a strong, vibrant, independent community of Romanies.

Detached from the main village, accessed via Heron Hill and Picardy Road, it was territory few but Travellers tampered with. For almost a century, the Gypsies reigned supreme and were synonymous with Marsh life. Families survived and thrived despite the lack of facilities and inevitable opposition from the settled folk. Families from Corkes Meadow, Ruxley chalk pits and the yards at Mitcham visited and intermarried. Roots were put down which proved difficult to remove, until nature took a hand.

The East Coast floods of February 1953 brought mayhem and disaster, caused by a fateful combination of gale force winds and a high spring tide. Families received no warning.

Betsy Stanley recounts:  "We all had to run for our lives because we were only three or four hundred yards from the river Thames. I think it happened at two or three in the morning. We went over to the morning. We went over to a bit of a bank and saw all the water coming over, but by the time it came over, we were all going up the road. We got dressed and were running as the water came up over the bank. It came really quickly."

Children were rushed out in prams and swum out on horse’s backs. We can only imagine the terror of running down rutted roads as the waters rapidly rose.

East Road was swept away entirely and in Belverdere itself, 300 lives were lost.

A few families succeeded in getting their waggons and trailers to the safety of higher ground, those less fortunate lost everything.

The following is a quote from Norman Dodds speech to the Commons, taken from Hansard, the government archives:

"As for hygiene and cleanliness, when an area of Kent was flooded in 1953, (Belverdere) Gypsies had to be accommodated in church halls. The W.V.S., in a report on the situation, stressed the surprise of its members at the high standard of hygiene in the halls occupied by the Gypsies. It is true that even in the most squalid quarters, one finds the greatest cleanliness observed by Gypsies. Their linen, their brass and china are spotlessly clean. They will not use to carry drinking water, a bucket that has been used for washing. They are scrupulously clean, yet they are condemned with the dirty people with whom they are often compelled to live."

As the flood waters receded....some braver families eased their way back. Others gave up entirely and settled into bricks and mortar, permanently giving up the travelling life.

The Thames had succeeded where Erith Borough Council had, for two decades, failed Councillor Alford described the remaining Gypsies as "A blot on the good name of Erith."

Not all in authority echoed Alfords jaundiced view. Norman Dodds (pictured below), the Labour M.P. for Erith and Crawford campaigned passionately for Gypsies and in particular, they access to water and sanitation. The families lost their champion when Norman sadly passed away in 1965.

James Wellbeloved, his successor continued the cause, and in 1968, the Caravan Sites Act was passed. This required every council to "Provide sufficient sites for every Gypsy residing in, or resorting to, their area."

That this duty was never satisfactorily fulfilled, is a story for another time.

Today there are three remaining Gypsy encampments in the Borough, with around 40 residents located in Jenningtree Way, Belvedere, Powerscroft Road, Sidcup, and Thames Road, Crayford, where a combination of stationary trailers, wash sheds and caravans remain. The history of Belverdere and that of the Gypsies is forever linked. Ironically, in 2011, sculptor Andy Scott was commissioned to create a piece to site in the area....he chose to create a cob, the Gypsy horse. "The rich cultural heritage of the Travelling Communities in this area and the contribution they and their horses made and are still making," heavily influenced Andy Scott’s choice of subject.