‘Apple Water’ is a small collection of poems and short prose based on Raine’s Romany family who amongst other things picked fruit, vegetables and hops in both Herefordshire and Kent. Many of these poems have been inspired by actual events, personal stories and photographs, as well as the inclusion of ‘found’ words which help to bring the characters to life. Raine uses Romani language (jib) to add authenticity to the life of the Travelling people and has woven it into the collection not only to honour these folk but to create new and innovative forms of poetry, combining both the old and new.

Raine Geoghegan lives in West Sussex. She has an MA in Creative Writing from the University of Chichester. Born in the Welsh Valley’s, she is half Romany with Welsh and Irish ancestry. Her poems and short prose have been published both online and in print with Under the Radar; Romany Routes Journal; Fair Acre Press; Words for the Wild; Anima Poetry Press; The Travellers Times; Fly on the Wall Poetry and many more. She has been featured in a documentary film, ‘Stories from the Hop Yards’ part of Herefordshire Life Through a Lens project, shown at the Ledbury Poetry Festival. Her profile has been on the Romaniarts website as part of International Women’s Day. 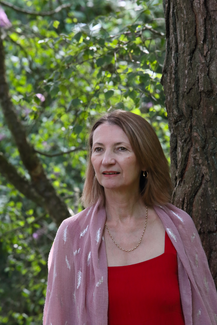 ‘The old language in a modern contemporary voice. I loved the poems.’ Frances Reilly, Welsh Romani Poet and Filmmaker.

‘These poems transport the soul to a vivid place, a real time.’ Lillian Howan, author of ‘The Charm Buyers.’

‘These are poems of Roma memory and survival brought to life through beguiling lyric and dramatic telling. They bring a way of living, of thinking, listening, and seeing, into immediate and natural focus.’ David Morley, winner of the Ted Hughes Award for New Poetry.

Apple Water can be purchased from Raine Geoghegan’s website at rainegeoghegan.co.uk

The following poem is from Apple Water and is reproduced by the TT with kind permission by the author and copyright holder Raine Geoghegan:

Me dad’s chinning the koshtie’s.

to me cousin Louie, she’s a didikai and goes

to school in London. Me dad calls it royal town

She ‘as to wear a uniform, red and gold, but she

If I ever went to school, me dad would ‘ave murder

if anyone touched me ‘oops or me ears.

Apple Water Country – a Romani term for the county of Herefordshire