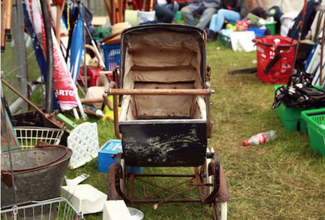 Gypsy and Traveller children are no more likely to be in the care of social services than any other children, a freedom of information investigation by the Traveller Movement has found.

The Traveller Movement launched the investigation in response to “concerns” from Gypsy and Traveller campaigners and families about the reported rise in numbers of Gypsy/Roma and Irish Traveller children in the care system and because of “high profile” campaigns against ‘forced adoption’ on social media.

The Traveller Movement’s research, published today and involving a series of freedom of information requests and an analysis of all the available data, found that there is no evidence of ‘disproportionality’. This means the number of Gypsy and Traveller children who are in contact with the care system is what you would expect when you consider the population as a whole.

The report does show that there has been an increase in the number of children in contact with social services who are listed as being of Gypsy/Roma ethnicity – the two groups are not separated in government figures - but concludes that this rise has occurred since the European Union enlargement and is being driven by migrant Roma families coming to the UK. The report also refers to the increase of casework by Roma organisations such as the Roma Support Group – first revealed in the Travellers’ Times in July this year – as further evidence of this.

In support of the findings from the Traveller Movement investigation, a spokesperson from the Equality and Human Rights Commission said:

“Nobody should be treated differently because of their background so it’s encouraging to see that, despite earlier concerns, the Gypsy and Traveller community are not facing discrimination when it comes to the care system targeting GRT families.”

Reassuring families who are concerned about this issue, Yvonne MacNamara, the Chief Executive of the Traveller Movement said: “Whilst every case where a child has to be adopted away from their family is a tragedy for those involved, it’s important to know that our research found there does not seem to be evidence that GRT families are being deliberately targeted by social services.”

Yvonne added “we understand that a lot of families are very worried. If for whatever reason you are contacted by social services and you don’t know what to do, there are organisations out there who can help and provide advice.”

To help families, the Traveller Movement has released an information guide with specialist support from family law experts. The guide explains the process and importantly provides a list of specialist family law organisations who can help including the Family Rights Group and the Margaret Clitheroe Trust. This is also being shared with other GRT organisations.

“What you have to know is that your children cannot be removed from your care without due legal process” Yvonne said. “So if you have any concerns whatsoever, then I would suggest looking at the information guide and seeking legal advice and expertise immediately. If there are any doubts about how to do this, then please do contact us directly and ask for the ESJU or contact a local GRT support group”.

The report found that the majority of Child Protection Plans are for relatively limited periods of time in the case of Gypsy/Roma children, and this is especially true for Irish Traveller children. This indicates that following enquiries and interventions from social services the case is concluded and children stay with their families.

The Travellers’ Times is currently investigating an incident where a Romany Gypsy mother was reported to her local social services after her sister feinted when they were both dropping the children off at their local primary school. Although the mother had to undergo the ordeal and shock of an investigation into her parenting, the social services concluded that the children were not at risk and no further action was taken. This then questions the nature of the referral in the first place, which the mother believes was made for discriminatory reasons, and came from the school and the ambulance service that treated her sister in the school playground.

Yvonne MacNamara told the Travellers’ Times that this perhaps shows a need for “increased cultural competency training for social care, educational and other relevant professionals” as well as a “proper dialogue between GRT communities and services” so they can better understand each other.

Alongside the information guide, the Traveller Movement will be releasing a short video explaining what can happen if you are in contact with social services and what help there is out there for families.