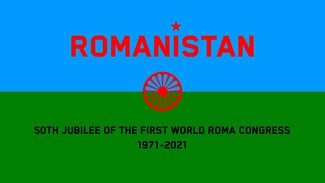 On 8th April 2021, the World Romani Congress will mark 50 years since the 1971 founding event in London. It was a crucial point in the history of Romani people and is now seen as the beginning of the worldwide Romani emancipation movement. It started a political fight for equality, mobilised through Romani organisations, and the unifying flag and anthem.

Grattan Puxon, one of the co-organisers of the First World Romani Congress, said: “At a time of rising far-right extremism and anti-gypsyism it is hoped that this anniversary year will bring Romani people and our allies around the world closer together, to create a common purpose, celebrate achievements, and build a stronger collective voice.” 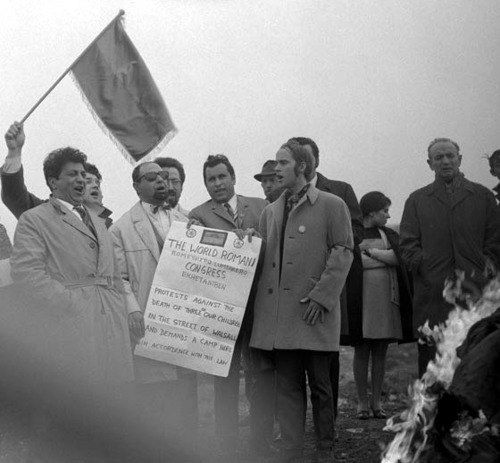 Roma activists from different countries across the world have been brought together by Grattan Puxon to develop an online congress program that will be live-streamed from the Maxim Gorki Theatre based in Berlin on 8th April. The programme will be live broadcast on  www.romanistan.com from 09:00 a.m. (GMT)

You can join the live stream on 8th April directly here or sign up for the Facebook event and get a notification once they are on air.

The concept behind Romanistan is to create a virtual place that highlights our transnational unity and provide a safe space for constructive dialogue that crosses all continental borders and connects Romani people worldwide. The president of the First World Roma Congress in 1971, Slobodan Berberski, once said: “Every place, there is Roma, there is Romanistan.” This utopia has now become reality! 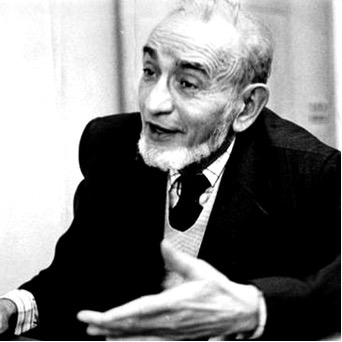 The online congress will start on April 8th and will be stretched over a month starting in London and moving to Berlin joining cities as far apart as Belgrade and Buenos Aires, activists from Barcelona to Bangalore, in India.

The 8th April live-stream programme will include contributions from people from all over the world: with the Romaday Parade from Berlin, a documentary video from the historical site of the First World Roma Congress near to London, unique video interviews with witnesses of the first Congress, a flash mob from Brussels, and videos about the situation of Romani people in different European countries and live music.

Many hubs across the world have shared content including a planning team based in the UK. Isaac Blake, chair of the London planning team said:

“I am proud to be the chair on this important project and very excited to be able to support bringing my brothers and sisters together from around the world; this event is of huge significance as it is the 50th anniversary of the first Romani Congress. It is great to reflect back on the last 50 years and think forward to the next."

Some of the contributions from the London team include a live-stream protest by Mania Malik, Bittu Virgil and Lee Wade at the Mahatma Gandhi statue in front of the British Parliament, Romani activists will protest against deportations of Romani people from Central and Eastern Europe following Brexit.

Another is the inclusion of a documentary video showing pictures from the 1971 World Romani Congress and leading Delegates. Among the now deceased are Slobodan Berberski, Fajk Abdi, Dr Jan Cibula, Zarko Jovanovic, Vanko Rouda, Melanie Spitta, W.R.Rishi, Tomas Holomek and others. Interviews from Thomas Acton, a student helper at the Congress, Tore-Jarl Bielenberg, who organised the festival, Brian Raywid who secured the venue, Will Guy who came with the Czech Delegation, Ian Hancock, who was new to the movement at the time and Peter Ingram who came in his trailer. The film is written and narrated by Grattan Puxon, general secretary of the First Congress, with an additional voice-over from poet and translator, Valdemir Kalinin. It’s been recorded entirely on Zoom and edited by Ioana Constantinescu.

There will also be, a short introduction to the World Roma Congress 50th Anniversary Art Exhibition. The curator's selection includes sculptures, paintings, drawings and photography from Damian La Bas, Imrich Tomáš, Gérard Gartner and other artists who have produced iconic works. The Commissioned Artworks gallery shows works that were selected by a jury from Europe wide applications. Klára Lakatos, George Vasilsescu and 8 further artist's work can be seen. The Archive Gallery introduces viewers to Melanie Spitta, filmmaker and important historical figures in Roma history. The Artist's Gallery contains work from Bogumila Delimata, from Poland and József Ferkovics from Hungary, among others. Finally, there is an Educational Gallery where there is work from organisations such as the BUDAÖRSI TANODA Foundation in Budapest. The exhibition can be enjoyed here: http://worldromacongressart.com

Join the live stream directly here or sign up for the Facebook event and get a notification once they are on air.