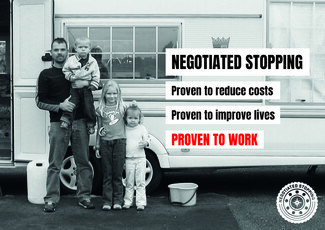 Gypsy and Traveller people and representatives from a mix of organisations across the UK came together in Manchester to take part in a discussion about Negotiated Stopping.

The Negotiated Stopping campaign is an attempt to persuade councils who normally use zero tolerance immediate eviction policies to instead negotiate with Travellers before applying for a court eviction order.

Over the past few years LeedsGATE’s campaign to encourage councils to negotiate over stopping places for Gypsies and Travellers in Leeds has gained a great deal of support and evidenced some good practice. With support from The Big Lottery the charity is now in a position to develop a conversation between Gypsy and Traveller groups and activists, local authorities, police services, academics and representatives of national governments.  This is to be a UK wide conversation and may lead to a further bid to take the work forward.

To begin the dialogue, the event was aimed at Gypsy Traveller civil society groups, supporters and activists from across the UK and was open to all but limited to 30 delegate places allocated on a roughly, first come, first served basis and with priority given to those with a direct interest in the subject of roadside, or unauthorised, encampment and ensuring that each of the four UK nations were represented.

“We were particularly keen to involve people who have experience of being roadside, or are directly supporting those who are, said Helen Jones, CEO of LeedsGATE, and we are delighted that so many were able to attend. Hearing first hand opinions and experiences is invaluable to gauging the appetite for taking this forward nationally”

Delegates were encouraged to share local experiences and raise questions.

“Negotiated Stopping pretty much saved our children’s lives” said parents from two families who have been involved directly in a negotiated stopping situation “Going to our local MPs for help was a waste of time, they are all too concerned about losing votes” said another.

There were some interesting examples from Scotland where they have a commitment from the government and are mapping out and opening up old stopping places.

“Negotiated Stopping is not new news” said Betty Smith-Billington “It’s just what my parents and grandparents did for decades”, a comment which prompted this great blog https://www.travellerstimes.org.uk/features/negotiated-stopping-step-back-says-violet-cannon

“I am really pleased that I’ve come here and not got answers to all my questions” said Violet Cannon “I’m reassured that this is the start of a conversation not the decision that’s been made, and I’ve always that conversation is where we need to be at to make things better for Travellers”

For more information about Negotiated Stopping and what it could mean for you visit www.negotiatedstopping.co.uk