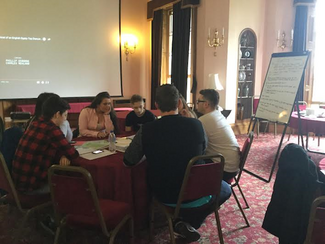 Young people from Travelling Ahead’s Youth Advisory Group, recently spent a day with the editorial team from The Travellers Times learning about the media; how to read it, challenge it and make it.

The group of young people - all Gypsies and Travellers from Wales - worked with TT Editor Mike Doherty and Charles Newland, Filmmaker and TT journalist, to make their own short film about the changing nature of racism.

The workshop took place at Baskerville Hall, near Clyro, Powys, where the young people stayed for the night before the workshop.

The group chose to make a film about racism and discrimination and what to do about it.

The discussion focussed on equality and why it was so often neglected by wider society when it came to Gypsy and Traveller people.

Tyrone Price’s question for the film got right to the heart of this:

“Have we actually improved tackling racism or are people just pretending to accept this concept of equality?” he said.

The group’s reaction was mixed, with some people saying it racism had changed from ‘the old days’ and was being challenged more, whilst some thought it would never go away and “would always be there.”

Mike Doherty, in a presentation at the end of the workshop, said Tyrone is right to think that equality was not taken seriously by many authorities when it came to Gypsies and Travellers, but that things where changing thanks to Gypsies and Travellers – including young people – stepping up to the plate and saying that they “had had enough”. He said The Travellers’ Times published many stories about racism being successfully challenged – so it can be done.

The event was a great success and here is what the young people had to say about it:

“It was a great day at Baskerville Hall as a young Gypsy girl to have my voice heard, I enjoyed the filming very much.”

“I enjoyed filming with The Travellers Times, as they are down to earth people and really want to have everyone's voice heard and making the short videos on the iPads made me more confident with film media.”

“I had a brilliant day”

“Had a great day at the advisory group last Friday. It was a fab experience and I would happily do it again.”

“I thought Baskerville Hall was brilliant. We learnt a lot about the media and how the media portrays Gypsies. I now know who to take any issues to. I also had a lot of help with organising my own forum.”

“Thanks a lot for inviting me to come along. I really enjoyed it and was great fun.”

Travelling Ahead works with Gypsy, Roma and Traveller children and young people across Wales to support them to have a voice; the new Youth Advisory group has been set up to ensure that young people can help plan and shape the work of Travelling Ahead now and in the future.

Travelling Ahead works with local partners across Wales such as the Equal Project in Torfaen and the Unity Project ( West Wales) who supported the young people to attend this event.