Should Tyson Fury be considered a role model? 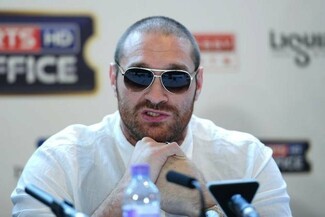 Tyson Fury is one of our best known and liked Traveller boxers and his fame has grown in recent years alongside his talent. To be fair, he has consistently said he does not speak for all Travellers and has refused to take on the ‘Traveller role model’ mantle, but unfortunately most of the media seems unable to resist making assumptions about us all based on what Fury has been saying in public.

As an athlete Fury is an inspiration to many young Travelling men who dream of one day becoming professional boxers and winning titles, but have his recent comments about both women and gay people let us down and does it help or hinder our cause to think of Tyson as a role model? What should we be fighting for?

One of our fights outside the ring as Travellers, is about how people see us - or our public image. After the atrocious portrayal of Travellers in ‘My Big Fat Gypsy Weddings’ and the grabbing scenes in it which showed us as sexist to the point of violence; does it really help to have someone like Fury – who has so much potential to show us in a positive light – provide racists with further ‘evidence’ of our perceived sexism, lack of education, homophobia and violence? I think not!

Much has been made about Fury's comments about women and says that he believes a woman’s place is “in the kitchen or on her back”.  What is clear from watching the video in which he made the comments most reported on is that they were meant to be taken as a joke. Just before he made that unfortunate joke, Fury also said to the video journalist that he believed in equality for women. And so he should believe in respect and equality for women.

There are plenty of Travelling women, both Irish and Romani, who do a lot for the rights and recognition of Travellers. It is women who are at the forefront of community development projects, women who are standing up on television talking against those that try to take away our rights, and it was women who were the loudest in the battle against Essex Council for Dale Farm.

We also have the likes of Brigid Quilligan and Rosaleen McDonagh in Ireland whose place is certainly not in the kitchen or on their backs! Rosaleen herself was presented with an award in outstanding achievements in Human Rights by the President of Ireland (herself a woman) for her community work and for her work with the LGBT Pavee movement, an organisation that fights for the rights of Gay Travellers.

You can read more about Rosaleen McDonagh here:

But what about Furiy's Christian beliefs? I happen to believe that all Christian churches, not even Evangelical, would agree with Fury. Pastor Steve Chalke of Oasis Waterloo http://www.oasiswaterloo.org/ in London has gone on record saying:

“That’s the point. One tragic outworking of the Church’s historical rejection of faithful gay relationships is our failure to provide homosexual people with any model of how to cope with their sexuality. In this way we have left people vulnerable and isolated. When we refuse to make room for gay people to live in loving, stable relationships, we consign them to lives of loneliness, secrecy, fear and even of deceit.”

Pastor Steve is not alone in his thinking, there are many like him. I could write a whole book’s worth of arguments about why Fury’s statements of his religious beliefs are not representative of Christians!

So in short, Tyson does not represent the way Travellers think about women or about gay people, it would be easy to find people who think his views are fair and do reflect Travellers in general, but there are plenty of people who also disagree with him, and plenty of Gay Travellers as well as women who are doing a lot for Travellers rights.

I think one of the reasons why Fury should not be seen as a role model was his response to critics when he said that anyone who didn’t like him “can suck my b**ls”!

Is that the voice we want to represent us on television? Does that really help us and our image? I don’t think so.

We should not let the media decide for us that Fury is representing us as Travellers. Settled people love to find one negative example of Travellers behaving violently, sexist or against gay people. But we know we have so many different opinions within our community and its time we allow all of them to be heard.

We need diverse positive role models to show that we’re not all the same. Involve Ireland have done a lot for that cause, with the recent calendar of Traveller Men and the earlier one of women. Everybody in those calendars was doing something for our positive image, giving something back to the community. You can see the calendar here: