Hijacking our culture: does it make us less human? 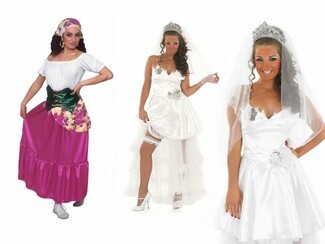 Samantha Donaldson, a young Scottish Traveller, contacted us through our Facebook Page with important points to raise about the appropriation and distortion of Romany and Traveller culture and heritage. After talking to the editor, we asked her to submit a blog. She did – and it’s a very important and challenging piece and we are proud to support this young writer. We are sure we will be hearing more from her.

For centuries Gypsy Travellers have been the centre of curiosity, particularly with romanticised perceptions on what Traveller culture is supposed to look like. We've seen this image continue on in more recent years with Gypsy inspired folk magic, Gypsy chic and Big Fat Gypsy Weddings on our screens.

But are the worlds of fashion, entertainment and media getting it right when it come to us? Sadly, for many ethnic minorities, representation isn't always fair, or appropriate.

Defined as taking aspects of culture without any care, knowledge or sensitivity towards the people who are part of said culture, cultural appropriation is viewed by many as being a massive hindrance towards equality, or political correctness.

“What you have now then is the marketing of racialized identities as tools for consumption. And certain racialized bodies and images are associated with hipness, coolness, edginess.”

The above quote is true for many minorities, such as Native Americans, who have had their culture paraded inappropriately at music festivals; and black youth, angry that the majority culture has sported dreadlocks and used blackface during Halloween. But what about us? Can Gypsy Traveller culture be appropriated?

The Channel 4 programme, My Big Fat Gypsy Wedding (MBFGW), for example, has certainly come in for its fair share of criticism, with some critics hinting at the appropriation and exploitation of Traveller culture for entertainment purposes. The show, according to some, seemed to present UK audiences with an inaccurate portrayal of our culture – a driving factor in cultural appropriation.

The Accidental Photographer, who was hired to take promo photos for MBFGW, says:

Although not always criticised by the UK mainstream media, cultural appropriation has been the hot topic of activists, Travellers and Roma – especially on outlets such as Tumblr and Blogger.

Tumblr user biggadjeworld says: “White female youth pay large sums of money to dress “gypsy”, or what they call boho. Well, Bohemia is a region of the Czech Republic. You cannot be Bohemian either, unless of course you are Czech. There is also a huge problem with equating Boho to “gypsy”.

“Not only have you offended me by trying to dress “gypsy”, but calling yourself a “boho-gypsy” just tore my heart into one million pieces.”

This sentiment is also shared by Romani writer Jessica Reidy.

“Whenever I see anything related to “Gypsy style,” I race to the article, praying, please be good, please be well-researched, please be real. So far, I have not found the holy grail of Romani fashion articles. Instead, I have seen the Sexy Gypsy. I have seen Kate Moss in a caravan, wrapped in a flowing blouse and baring a breast in a trashy U.K. tabloid.”

The voices speaking out against cultural appropriation are loud and clear, so why isn't there enough being done to address it? Cultural appropriation – amongst other issues – is surely helping fuel the racism we're trying to stop. As a Traveller, I do not want to be seen as a product, or a charm that can be bought from a shop. We are a living, breathing culture. A culture seeking respect.

When people wear Gypsy Halloween costumes, or dress in a way that is “Gypsy”, they are allowing ignorance to flourish. They are telling the world that we are “free spirited” nomads who couldn’t have possibly been oppressed because we were too busy “dancing”, “singing” and “stealing children”.

Hijacking our culture makes us less human, a novelty that is there purely for enjoyment and exploitation. Unless we are all prepared to stand up and be counted, cultural appropriation will only grow as it becomes easier to communicate in this digital age.