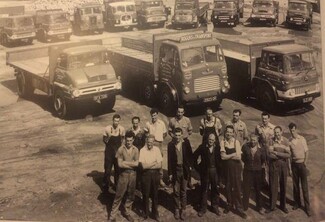 Canford, in Dorset, dates back to Saxon times and covers thousands of acres of heatherlands of birch, pine, broom, furze, ferns and blackberry bramble from Wimborne to Poole Quay. A haven for wildlife of deer, fox, rabbit, lizards, adders and home to the Dartford Warbler. A Charter of 1248, gave Turbary right to the local people of the emerging town of Poole for cutting of peat for fuel, to graze cattle and hunt game. These rights ended with the Enclosure Act of 1822.

Over the years New Forest and Purbeck Gypsies passed through, selling many wares, providing services, repairing furniture and sharpening knives/scissors. Local farmers, landowners and villagers relied on them as farm labourers and seasonal workers. The most popular custodians of Canford estate were Ivor Bertie Guest and Lady Cornelia Guest of Canford Manor (the Aunt of future Prime Minister Winston Churchill). Also known as the philanthropists Lord and Lady Wimborne, they built over 100 ‘Lady Wimborne Cottages’ for local people, donated land for a ‘People’s Park and Ladies Walking Fields and allowed Gypsies to live on Canford commons.

Many Gypsies made Canford their home creating numerous encampments, some of which had quirky names such as Cuckoo Bottom, Heavenly bottom, sugar knob mountain, monkeys hump lane, cinders town, frying pan, wallywack, bribery island, the Bogs and Fox Holes. Others were named after the nearby road or commons. The encampments contained many flimsy benders and elaborately furnished vardos. The artists Augustus John and John Turner were very popular with the local Gypsies and spent time painting them at these encampments.

Many great Gypsy characters frequented these encampments their names and stories becoming legendry.

At a young age Betsy Smith from Heavenly Bottom encampment was sent to Bournemouth by her mother to try and sell bunches of white daisies there. She was so good at it becoming the first of the famous Bournemouth flower girls. Legend has it that the local Gentry bought her flowers because she was so pretty.

Local Gypsy women like Nancy Crutcher (who grew up at Heavenly bottom) and Mary Mabey made exquisite floral wreaths, tributes button holes for weddings or fancy imitation flowers from coloured crepe. Nancy lived at the big house in Millhams lane, Kinson village, with her husband Job Jeff and family from Bourne hill encampment. Mary lived in Newtowns Terrace with related show people with the family names of Kings and Castles (Jean Castle became Pooles beauty Carnival Queen in the 1960s), prior to moving into nearby council housing. Groups of Gypsies were regularly seen selling flowers and lucky heather at their spot outside of Woolworths store on the streets of Poole.

Gypsies camped at "New England" encampment on Turbary Commons fernheath West Howe from early 1800s.Named by the New Forest Gypsies. Louisa Barnes nee Willett (Gypsy Queen) and her husband John stayed there, long with Benjamin Stanley the brother of Levi who was disowned by his family before they emigrated to the USA. It was said that a curse was put on him and future generations. Horace Cooper grandson of Louisa and one time rag and bone man in Wareham grew up at the Dip encampment Wallisdown. Kinson village school was nearly overwhelmed when the numerous Gypsy children from the encampments arrived there at the start of their new term.

Sammy Stanley Snr, rag and bone man, gave local children rides on his grey mare and cart, becoming the first Gypsy to move from Heavenly bottom encampment into a council bungalow. In the early 60s Caroline Hughes (Gypsy Queen wife of John Hughes) parked in a layby near the old Wareham road where she was discovered by US Folk singer Ewan McColl. Ewan tape-recorded a collection of Caroline’s songs, which she had learnt as a child from her mothers’ lap and around the yog. Ewan took these back to the USA where they were sang by recording artistes worldwide.

For generations locals worked at hordes of brickyards, potteries and clay pits. Many Gypsies closely related to one another ran a variety of local businesses. The Whites became long-established shopkeepers /postmasters in the Kinson village. The Rogers family, related to the Stanleys, Scotts, Brixeys and Cherretts, were brick makers involved in building of both the Newtowns Weseleyn and Evangelical churches. Their many brickworks included those at Colehill Wimborne, Mannings Heath, Fancy road Newtown and the Dell Parkstone. Charles Rogers used monies raised by his wife's (Emily Elizabeths nee Fancys) pigs to start his first business. Reg Rogers ran a small holding farm at the Mannings on land bought from Lady Wimborne. At the end of the war Sid Rogers bought up abandoned army trucks, creating Rogers Transport. Brixeys had a contractors/construction yard and the Sherwoods a coal yard in Newtown. Mitchells and EF Phillips ran haulage concerns, with Fred Phillips starting with just a pony and cart on a sand and gravel pit at the Mannings Heath. Charles Trent scrapyard on Ringwood road, became the largest in the world. Bill Knotts first job was selling shoe laces and match boxes "up on hill" at Parkstone, before establishing the world’s largest caravan empire - Bluebirds in Newtown. Today Nelson Stanley runs Stanleys scrap yard at Alder Hills Branksome, in spite of his disability – Nelson lost a leg whilst retrieving a coin from his metal breaking crushing machine.

Fanny Longman lived next door to the Dolphin pub Kinson village (now Gullivers) operating her business delivering sacks of coal from her pony and cart. Sammy Stanley Snr and sons (Sammy and Abe) attended Newtowns Albion pub(the snake).Bill Dibben a local rag and bone men was tragically killed outside the pub whilst crossing the newly built zebra crossing on its first day of use.