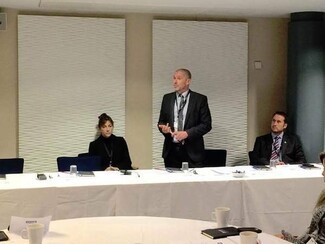 The first ever association for Gypsies, Roma and Travellers who are serving police staff and officers held its first ever National Members Conference on Thursday 5 November 2015.

The Gypsy Roma Traveller Police Association campaigns for cultural change within the Police Service and now has 120 members signed up from across the UK.

The event, which was held at held at the Police Federation headquarters in Leatherhead, was an opportunity for Gypsy, Roma and Traveller police staff and officers to hear from distinguished speakers and to network with fellow police officers and staff.

Jim Davies, the Association’s co-founder chaired the conference, opening with a passionate speech about the often conflicting pull he feels between being a proud and committed serving police officer; yet having to acknowledge the negative attitudes, biases and stereotyping that exists towards Romani and Travellers within the Police Service.

“I care deeply about the police but I want it to change how it treats Gypsy, Roma and Traveller communities,” he said. “The police must put its own house in order first before it can expect better engagement from Romani and Traveller people.”

The Police Federations’ Dave Bamber said: “The Police Federation of England and Wales is very proud to facilitate and support this, the first Gypsy Roma Traveller Police Association conference in the UK.  The level of speakers reflected the quality and commitment that the Association is able to bring, and their existence will hopefully go a long way in bringing about a real culture change within policing.”

Deputy Chief Constable of Cheshire Janette McCormick, who is also National Police Chiefs Council Diversity Lead for Gypsy Roma and Travellers, spoke about the need for change and how making a stand can positively influence other people’s behaviour.  She also felt that as serving police officers, society expects them to perform at their best, yet felt this was very challenging for them if they felt unable to be honest about who they were in terms of their own background.

Yvonne MacNamara, CEO of the campaign charity the Traveller Movement, spoke about the need to tackle the level of hate speech and discrimination towards Gypsies and Travellers both within the police and in wider society. After the event Ms McNamara said “It was an excellent event and good to see some leadership initiative being taken back to local policing units,” she said.

Louis Provart, the Co-Chair of the National Gay Transgender Police Association, talked about how he deals with the challenges of being a member of a non-visible minority group working within the police force.

Marc Willers QC, one of the UK’s foremost barristers specialising in Gypsy Roma Traveller Law, talked about his work with the GRT communities, the need for Romani and Travellers to report more discrimination and hate-speech against them and for the police to listen more to the concerns of these communities. “I have no doubt that the GRTPA will continue to shine a light on what has been called ‘the last acceptable racism’”, he said.

Gilbert Houalla of Thames Valley Police spoke of his work leading a recent Thames Valley Review of Policing GRT communities within his force. He talked openly and honestly about his old prejudices as a Police Commander. He thanked Jim Davies for forcing Thames Valley to reconsider their approach and for helping him to change his thinking and views.

Rainer Schultz, a European expert and Professor of Modern European History at Essex University and the founding editor of the journal Holocaust in History and Memory’, gave a presentation on the genocide against the Sinti and Roma during the Second World War.  This served as a fitting reminder to underpin the importance for the GRT communities to unite and stand firm against discrimination where it is encountered. He put forward an argument for the moral obligation of senior figures/role models to “come out” as Gypsies and Traveller to help enable public opinion to change.

The Conference was brought to a close by GRTPA Co-Founder and Executive Director Petr Torak MBE. Mr Torak gave special thanks to all the members and Romani’s and Travellers from outside the police who have been behind the GRTPA from the start.