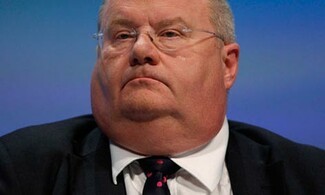 Mr Pickles gets nasty, we all pay the price.

Who was it that said “They don’t like it up em do they?” This simple phrase has been rattling around my head this week in suitable comedic style.  Last week began with great promise.  Eric Pickles (Department of Communities and Local Government Secretary of State) was rapped smartly across the knuckles by High Court Justice Gilbart who found that the Tory big hitter had discriminated against Gypsy and Traveller planning permission applicants including via unfairly delaying ‘justice’.  For those seeking a just and humane society to live in, this was a rare and resounding victory which was enjoyed but briefly. One may guess the Minister didn’t really like that up him.

For the several months prior to this pleasing decision, Communities and Local Government officers were tasked with facilitating activity named a ‘consultation’, into proposals to redraw planning guidance in respect of Gypsy and Traveller site applications.  Even as we danced in the glare of long sought justice, we knew that the man chastised had cards still up his sleeve.  And so it proved.  No polite response to our engagement with the ‘consultation’, just an article in the Telegraph for our trouble, shortly followed by other dailies.

According to the Telegraph,  SoS Pickles has decreed that Gypsy and Traveller people will, in the very near future, have to prove that they ‘travel’ for two months every year in order to qualify to own or occupy a ‘traveller pitch’ (lower case t courtesy of CLG).

Okay Mr Pickles that really stings.  We know your feelings were hurt when the court identified that that you had discriminated against people according to their race and denied them timely justice.  But really?  Do so many communities in the UK need to experience an increase in un-authorised encampments, made up of people having to prove that they really, really are a Gypsy (oops sorry, I mean traveller) in order to qualify for Mr Pickles dubious beneficence?

According to Mr Pickles’ new definition most of the people currently living, in relative contentment, on Gypsy sites (publicly or privately owned) may not qualify to be there unless they demonstrate spending two months of the year being nomadic according to Mr Pickles bucolic definition of their own culture.  If you can’t imagine that any local authority might actually enforce this against existing site occupants just take a look at recent coverage of Cllr Birtwistle’s comments in Burnley.

So what is likely to happen?  In the very least the roadsides will fill with people having to prove that they are ‘travellers’.  It’s going to be very expensive for the ordinary householder.  The obvious costs are in ‘eviction and clean – up’ costs routinely declared by local authorities who are unpractised at effectively managing ‘nomadism’, the very nomadism that Mr Pickles is due to declare is pre-requisite for wanting to live, traditionally, among your family, in mobile structures.  Less obvious and measurable, but costs no less, are in conflict between neighbours, increased stress, call centres responding to complaints, police cars doing ‘drive by-s’, reduced access to early intervention healthcare, reduced opportunities for adequate education, reduced contributions to local associations and community life….

But Gypsies and Travellers don’t like it up em any more than anyone else, why would they?  So the chance that expensive court cases, protests and demonstrations might be the response to Mr Pickles’ actions are surely quite high, and undoubtedly costly to all.  And for what? Mr Pickles’ claims he is acting to protect the greenbelt.  Is the greenbelt really so terribly threatened by a few Gypsy families?  CLG itself estimates that less than a square mile of land in the whole of England is necessary to provide enough pitches for every Gypsy and Traveller family who needs one.  Many applications are not on greenbelt so we aren’t talking about the whole square mile being in the greenbelt.

Leeds GATE is a pragmatic organisation.  We try to avoid getting caught up in arguments about rights and wrongs.  Much better, we feel, to find common ground on which to solve problems affecting communities.  We can happily say that our pragmatism (and that of others involved) has led to much reduced cohesion issues around unauthorised camps and indeed, without great fanfare, to new site provision in Leeds, reducing the numbers of homeless Gypsy and Traveller people moving around the city.

Please do not say that we didn’t warn you.  Is an unhappy, costly, potentially illegal, pursuit of Mr Pickles private vendetta against certain racial scapegoats really a road we want to travel?