DALE FARM – WHERE TO NEXT? 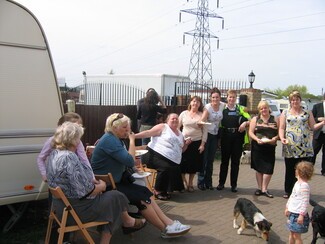 DALE FARM – WHERE TO NEXT?

On the 22nd January 2009 the Court of Appeal upheld the lawfulness of the Basildon District Council’s decision to use the Town and Country Planning Act 1990 Section 178 (effectively direct eviction action where there is a breach of planning control) to clear the unauthorised developments at the Dale Farm site.

It is important to remember that Dale Farm is a very large site in the Green Belt. Jan Luba QC, the Barrister for the 40 or so Irish Traveller families who took this challenge, accepted at the outset of the case that the Travellers “have reached the end of the road in their attempts to regularise their position by obtaining planning permission or temporary planning permission”. Therefore, it does not bear comparison to those small unauthorised developments throughout England and Wales where there is an increasing hope on many occasions of at least obtaining a temporary planning permission. The case raises the very important issue (which is increasingly coming to the fore as we move from the assessment process to the location process) of what local authorities should do in terms of seeking out alternatives when they are deciding whether to move on both unauthorised developments (i.e. where the Gypsies or Travellers concerned have failed to get planning permission on their own land) and unauthorised encampments.

The questions in this case, therefore, were: ‘when should they leave?’ and ‘what should happen before they leave?’

The Judge a t first instance, Mr Justice Collins felt that the Council had not done enough:

“[F]urther consideration should be given to whether any sites can be found in the district and whether any families can be allowed to remain for the time being. In addition, I do not think the possible effects of the homelessness duty have been sufficiently dealt with…..Finally I think that the approach has been that the sites should be cleared rather than a consideration of whether there are any individual families whose circumstances are such, whether because of serious ill-health or the needs of their children, that in their individual cases eviction would be disproportionate”.

The Court of Appeal overturned the Judgment of Mr Justice Collins. Lord Justice Pill, given the leading Judgment, stressed that the provision of sites would be dealt with in the way envisaged by the government’s planning circular, 01/2006. He stated:-

“Whether an attempt should be made to bring forward DPD [Development Plan Document] Allocations (paragraph 43 of Circular 01/2006) may be the subject to debate but failure to do so does not, in my Judgment, and in this particular context, render a decision to act under Section 178 unlawful”.

“While the basis for action under Section 178 is present a Council taking such action must, however, be mindful of its duties under the homelessness legislation and the need to consider cases individually. In my Judgment, the Council has not failed in either respect”.

It is unfortunate (and this is true of the homelessness case of Kathleen Lee - v – Rhondda Cynon Taf County Borough Council which I have dealt with in an earlier blog on the old TT website) that the possibilities of ‘tolerated’ locations were not being considered in this case. Why can local authorities not identify small pieces of land where temporary sites with basic services could be located? This could be a disused lay-by, a blocked off former road, a disused car park, a piece of underused land, a piece of under utilised Forestry land and so on.

Some of the Travellers in the Dale Farm case are now petitioning for Leave to Appeal to the House of Lords. It is expected that the eviction will be stayed in the meantime.

Thanks to David Watkinson of Garden Court Chambers, one of the barristers on this case, for his comments on this blog.