Dale Farm and beyond 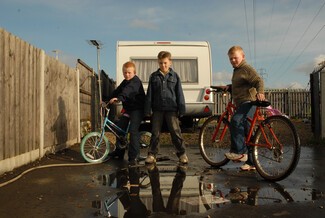 Does the use of direct action to evict Gypsies and Travellers breach their rights protected by article 8 of the European Convention on Human Rights?

Article 8 of the European Convention on Human Rights states:
Everyone has the right to respect for his private and family life, his home and his correspondence.
There shall be no interference by a public authority with the exercise of this right except such as is in accordance with the law and is necessary in a democratic society in the interests of national security, public safety or the economic well-being of the country, for the prevention of disorder or crime, for the protection of health or morals, or for the protection of the rights and freedoms of others.

The EHRC’s discussion of Gypsy and Traveller accommodation issues in the context of  Article 8 takes place at pp46-53. At p47 it is stated:
Some Gypsy and Traveller groups and their legal representatives have argued that evictions from unauthorised sites are not lawful as the provision of authorised sites is inadequate…Thus far, these claims have not been upheld in court (see the Dale Farm decision). However, legal advice received by the Commission suggests that there may be grounds to challenge that decision (our emphasis).

The EHRC had obtained its legal advice from Andrew Arden QC, a top housing law specialist.  The EHRC had asked Arden QC to advise the Commission on whether it could challenge the decision by Basildon Borough Council to use direct action powers to evict a large number of families from the site at Dale Farm.

Arden QC concluded that the decision could be challenged on the grounds that it was unlawful. In his advice Arden QC referred to the Supreme Court judgments in Manchester CC v Pinnock [2010] UKSC 45 and Hounslow LBC v Powell [2011] UKSC 8. He quotes Lord Neuberger’s judgment in Pinnock (at para 45): Any person at risk of being dispossessed of his home at the suit of a local authority should in principle have the right to raise the question of the proportionality of the measure, and to have it determined by an independent tribunal in the light of article 8, even if his right of occupation under domestic law has come to an end.

A judicial procedure which is limited to addressing the proportionality of the measure through the medium of traditional judicial review (i.e. one which does not permit the court to make its own assessment of the facts in an appropriate case) is inadequate as it is not appropriate for resolving sensitive factual issues.

If the court concludes that it would be disproportionate to evict a person from his home notwithstanding the fact that he has no domestic right to remain there, it would be unlawful to evict him so long as the conclusion obtains – for example, for a specified period, or until a specified event occurs, or a particular condition is satisfied.

The only way for the Travellers at Dale Farm to challenge the Council’s decision to take direct action (using its powers under the Town and Country Planning Act (TCPA) 1990 s178) was by way of judicial review. Arden QC argues that judicial review does not provide a sufficient remedy in circumstances where the Travellers were seeking to rely on their Convention rights. By way of contrast, if the Council had used its powers to apply to the court for a planning injunction requiring the Travellers to leave Dale Farm (under TCPA 1990 s187B) then that process would have given the Travellers the opportunity to argue their case on the merits before a Judge and to have an independent determination of the proportionality of the Council’s decision to seek such an order (see South Bucks DC v Porter [2003] UKHL 26).

Arden QC concluded that, if the Council considered it necessary to take enforcement action, then it ought to have sought a planning injunction and that its decision to circumvent that process breached the Article 8 rights of the Travellers concerned.
In the event the EHRC were not involved in the Dale Farm judicial review and Arden QC’s argument was not pursued. Instead, the Travellers contended that the Court should consider the proportionality of the Council’s decision for itself and not be limited by the confines of traditional judicial review. The Court disagreed and it took the traditional approach to the assessment of whether the Council’s decision was unlawful. Having done so, the Court concluded that the decision was lawful and the application for judicial review failed (see Sheridan and others v Basildon BC [2011] EWCA Civ 1374).

Whilst our Courts continue to take such a restricted approach in judicial review proceedings to the assessment of the proportionality of eviction measures it seems to us that Gypsies and Travellers will have good reason to argue that our system fails to protect their Article 8 rights.

The unsuccessful Dale Farm Travellers have lodged complaints with the European Court of Human Rights (ECtHR) and when doing so have adopted Arden QC’s argument.  We shall have to wait a long time for the ECtHR to pronounce judgment on the complaint. In the meantime we expect that the argument will be raised by Gypsies and Travellers in other cases before our domestic Courts.

TAT operates a self-funded national telephone helpline for Gypsies and Travellers. The number is 0121 685 8677 and the line is open Monday to Friday 9am to 5pm

Garden Court has a specialist team dealing with Gypsy and Traveller Law.